Fort Bend County Libraries is currently in Phase 1 - Curbside Pick-Up Service ONLY – at ALL locations.

NO branches will be available for in-library use at this time. For more information, click here.

The Sugar Land Book Club at Fort Bend County Libraries’ Sugar Land Branch recently celebrated the 20th anniversary of the book club’s inception. The group, which still includes three of the original members, reminisced about some of the books they have read over the years.

The Sugar Land Book Club started in February 2000, under the guidance of (then) Branch Manager Joanne Downing, who is now Assistant Library Director. Downing has overseen and moderated the book club ever since, and it has affectionately become known as “Joanne’s Book Club.” 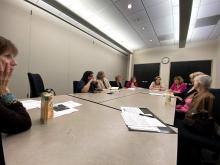 Since the club’s inception, members of the book club have read 223 books, ranging from modern-day classics and current bestsellers to hidden gems and diamonds in the rough. The selections have represented a wide variety of genres, including historical fiction, poetry, nonfiction, science fiction, fantasy, and even YA and children’s books. The selections were all thought provoking, but there were some that were particularly challenging or controversial and definitely not for the “faint of heart.”

“We try to push ourselves to read books we wouldn’t normally read,” says JoAnne Gulliver. “When we read Harry Potter, we pondered whether we would have read and enjoyed it as a child. I definitely would not have. The meeting where we discussed that book was still interesting because of the different perspectives from the other members. At that time, there was a sociology professor in the group that discussed elements in the series that I never would have thought of.”

Yvonne Lowe remembers the group’s discussion of The Promise, written by Ann Weisgarber (who was also a member of the book club). “There were facts that Ann dug up that intrigued all of us. Rattlesnakes killed so many residents after the Hurricane of 1900. Reading about the lost orphanage, children, and nuns was chilling and shocking. This book remains a favorite and is relatable to Texas residents especially after the traumatic events of Hurricane Harvey.”

Members of the book club have never shied away from difficult or controversial topics. Yvonne Lowe recalls the very first book club meeting she attended, when the discussion was on The Association of Small Bombs, written by Karan Mahajan. “The book was about terrorism and not an easy read.” She adds that the discussions are not just about the book. “Joanne (Downing) is a smart leader and gives us insight into the author we are studying, with biographical content as a backdrop.”

“The discussion opens your mind and helps you see things differently than the direction your mind might have taken you,” says Debbie Frerich. “We always have a great discussion, especially when we don’t all agree if we like or dislike a particular book.”

Rhonda Yamauchi agrees. “I have even gone to a meeting not liking a book, and left the meeting ‘liking it’ because the discussion brought out things in the book that I didn’t think about.”

In reading works by international authors or by American writers from different cultures, the group gained insight into the beliefs of diverse people around the world. The reading list included works by authors with backgrounds in Spain, India, Japan, Mexico, France, and much more. Prominent multicultural authors have included writers such as Kazuo Ishiguro, Khaled Hosseini, Jhumpa Lahiri, Chitra Divakaruni, Rudolfo Anaya, Irene Nemirovksy, Isabel Allende, Yann Martel, Stieg Larsson, Li Cunxin, and many others.

The composition of the group has grown and changed over the years, with new members always adding fresh perspectives.

“I wish we had some male readers to join us – they often add new insights to our discussion,” says Downing. “One gentleman who was a member -- he has since passed away -- could be a bit cantankerous, but his opinions always kept the discussion lively!”

Of the members of the group, one emerged as a very accomplished, award-winning author herself. The book club, its members, and their discussions gave her insight that proved helpful in writing her novels. “When I started attending the club, I was in the early stages of writing my first novel,” says Ann Weisgarber. “I didn’t tell the members this. Nor did I tell them I was absorbing valuable lessons about readers. Because of Joanne’s book club, I learned that in a group of readers, some will love a book, others are lukewarm, and a few can’t bring themselves to finish it. I learned that a reader’s personal history influences his/her perception of a book. The biggest lesson, however, was that although the author writes the words, each reader has his/her own interpretation of the story. The story belongs to the reader, not to the author.” 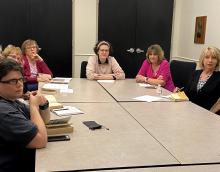 Yvonne Lowe welcomes the camaraderie she finds at the book club, and credits discussions at the book club for helping to develop open-mindedness. “I enjoy meeting a diversity of people and hearing other’s life experiences that can influence different outlooks and opinions.”

Lowe and others in the book club all agree that the book club has opened their eyes to books and genres they might not otherwise have read. “I have expanded my interests and read books that are not necessarily ones I would choose,” she says.

Ann Weisgarber, who has since written and published three successful novels -- The Personal History of Rachel DuPree, The Promise, and The Glovemaker – also points out that one of the best parts of the book club are the members.

“During the months following 9/11 and Hurricane Ike, and while my parents were ill, I needed the book club more than ever. The members had become friends, and while the world seemed to have fallen apart, we continued to meet, a reminder that literature can bring us together and uplift us.”

The members have different reasons for wanting to join the book club, but all agree that once you start, you quickly become hooked. “I have been a member of the Sugar Land Branch Library Book Club for 15 years,” says Debbie Frerich. “It is actually one of the best things I have done for myself.”

Ann Weisgarber has since moved away from the Sugar Land area, but she has fond memories of the book club. “On the surface, the club didn’t have the usual frills associated with many book clubs – food and liquid refreshments weren’t served. What we had, though, was Joanne. She kicked off each discussion with a summary about the author’s background, honors, and how the author came to write the story.”

Some members prefer reading the hard copy, print version of books that they can hold and flip through pages, while others have embraced the digital versions.

“I do not have a Kindle reader, and I have never used audiobooks,” says Yvonne Lowe. “However, many of the members do. It is something I may try one day. I feel like my eyes like reading a (hard copy) book better.”

Audiobook versions of the book are also a good option, particularly for commuters who make efficient use of their time in traffic by listening to the selection of the month.

New members are always welcome and encouraged to join in the discussion. The meetings are very relaxed. “We arrive, chat, and weigh in on discussions in a non-judgmental manner,” says Yvonne Lowe.

The next meeting of the Sugar Land Book Club will take place on Tuesday, February 25, 2020, beginning at 7:00 pm. The book to be discussed is A Spark of Light, written by Jodi Picoult.