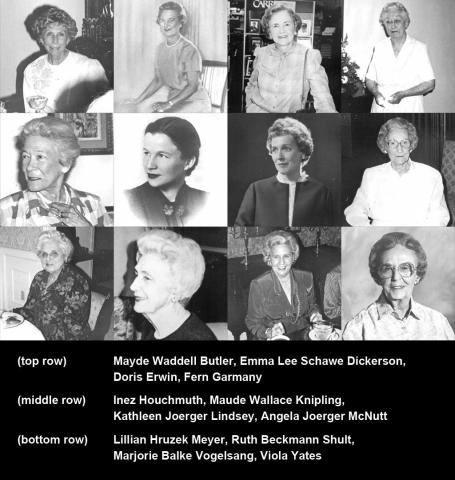 In 1947, a group of Rosenberg ladies who were members of the Share-a-Book Club decided to undertake the establishment of a library for Fort Bend County. Earlier attempts toward that goal had been made by other organizations, but none were successful. The Share-a-Book Club felt that county roads were, by 1947, adequate to support a bookmobile, and that a library to benefit the entire county could be founded.

The club appointed Mrs. Knipling, who had majored in library science, to determine the necessary procedure to establish a library, by consulting with her friends who were in library work. She invited the librarian from El Campo to give the club detailed information about the preliminary work to be completed before approaching the county commissioners in an effort to accomplish its goal. The El Campo librarian chaired a group to study thoroughly the organization and financing of the proposed library.

Share-a-Book Club members visited a number of libraries in neighboring areas to familiarize themselves with library operations. Mrs. McNutt developed a plan for contacting people in the county who would be interested in seeing a library established. The group then divided into teams of two and contacted every community in Fort Bend County--every civic organization, all of the ministers and priests in Fort Bend County, and all civic-minded people who would be interested in the establishment of a library. Some of the groups were asked to write letters to the county commissioners expressing approval of the project.

Each of the groups was asked to send a representative to a meeting with Commissioners' Court. The ladies hoped to impress on the court the interest of county residents in the creation of a library. On May 12, 1947, the date set for the Commissioners' Court meeting, the people of Fort Bend County responded magnificently to the appeal; at least 50 people, from every part of the county, were present.

The County Judge at that time was Charles Schultz; commissioners were J.C. Gassaway, Tom Snedecor, I.G. Wirts, Jr., and Andrew Briscoe. Mrs. Lindsey addressed the court, requesting the establishment of a library and explaining to the court the method of financing the library, its needs, and the manner in which a bookmobile would make books available throughout the county. The court granted the group's petition, and the library was founded.

Its first home was in the City Hall in Rosenberg. Mrs. Shult and Mrs. Lindsey convinced the Rosenberg city fathers to provide a place in the City Hall to put the books, and the Share-a-Book Club helped put up shelves. It was obvious early on that the small space would soon be inadequate. The club continued to work for the purchase of a bookmobile, because of its promise to people throughout the county that the new library would serve the entire county; the purchase was made in 1948. The club's first president, Mrs. Shult, served on the first library board; other board members were selected from across the county, reflecting the concept of a county-wide project.

Fort Bend County Libraries has now grown to a full library system, with 11 locations throughout the county. The library also manages the County Law Library. The original 12 members probably could not have foreseen what would be the magnificent fruits of their long-ago efforts, but we’re sure they would be very proud.