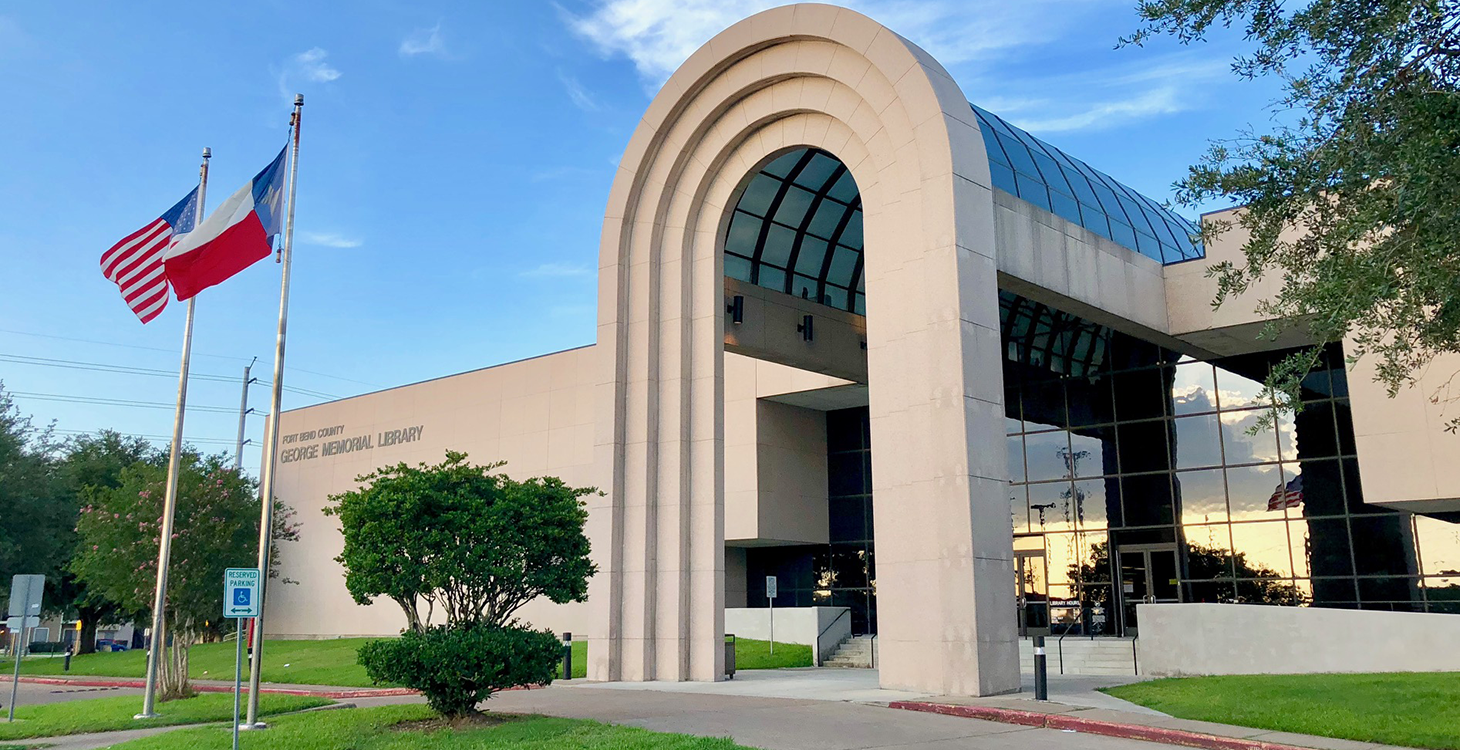 10:00am - 11:00am
George Memorial Library
Registration
This event is in the "Adult" group.

6:00pm - 6:30pm
George Memorial Library
Library Branch: George Memorial Library
Room: Meeting Room (George Memorial)
Age Group: Everyone, Infant-Preschool, Elementary
Program Type: Story Times
Description:
Stories, songs, and action rhymes for families with children of all ages. This 30-minute activity takes place at the library. Take-home crafts will be available at the end of the program. Pajamas and blankets welcome!  ...
This event is in the "Young Adult" group.
This event is in the "Adult" group.

In Person: Staycations in Houston

In Person: Staycations in Houston

Computers for public use are available at this branch by reservation or on a walk-in basis.

George Memorial Library provides free WiFi access to the public throughout the building. Contact the Adult Reference Department at George Memorial for more information and connection instructions to use your personal laptop at the library.

The staff of the Fort Bend County library system conducts entry-level classes on computer software, on a variable basis. Examples include “Computers 101 ” and “Hands-On Internet.” Classes are not available at all library locations. For the current classes available, check under Computer/Tech type programs on the calendar.

George Memorial Library houses a computer lab on the second floor, with 18 computers and an instructor's computer, as well as a large screen to show computer/Internet screens, video and satellite downlinks. When the lab is not being used for training purposes, it is open to the public. Patrons may reserve some of the computers at this branch.

George Memorial Library has a Kurzweil computer that will read text aloud and a machine that will enlarge print for visually-challenged patrons.

Printing from the public-access computers is accomplished through the use of network laser printers. You must have a library card to print. A SmartKiosk is available to add value to your library card for printing and copying while in the library.

A flatbed scanner is available at this library.

A 3D printer is available at this branch for use by anyone with a valid Fort Bend County Libraries card or a valid government-issued photo ID.

Patrons can bring print files in .stl format on a flash drive to the library. Library staff will be the ones to actually print the object. A fee of $0.20 per gram of filament used will be charged, with a $1.00 minimum.

Small items can take as little as 20 minutes to print, while other items can take much longer. Projects printed at the libraries have a 5-hour print time maximum. The 3D printers can print objects up to 8” wide x 8” high x 8” deep. Designs must be copyright-free or the patron must have license authorization.

You are not permitted to use FBCL's 3D printers to create material that is: prohibited by local, state or federal law, material that is unsafe, harmful, dangerous, or poses an immediate threat to the well-being of others, including weapons.

George Memorial Library has several black-and-white and color copiers available to the public.

Typewriter use is free at George Memorial Library and is available on a walk-in basis.

The Genealogy and Local History Department at George Memorial Library has several microfilm reader/printers available to the public. Copies are 10¢ per page and payment is by coin.

Notary Services are usually available to the public from 9:00 am to 4:00 pm, Monday through Friday. Notary fees are $1.00 per signature.

*Available in the FBCL Administration building, behind George Memorial Library.

George Memorial Library is committed to providing Adult and Youth educational, informational, and cultural programs for its patrons. For a list of programs, go to the library’s Calendar of Events.

Literacy and English as a Second Language

Literacy is important to community growth and an adaptable, diverse workforce. Partnering with the Literacy Council of Fort Bend County, George Memorial Library provides facilities for persons wishing to learn to read or to learn English as a second language. Please call 281-341-2652 for more details.

Study Rooms: Cannot be reserved; they are available on a walk-in basis only. 10 study rooms are available. (Capacity 2-6 per room)

George Memorial Library (GML), the main library in the system, has the largest collection of materials in the Fort Bend County Libraries system. GML has a particular focus on large-print books, parenting, Spanish-language books, teen materials, literacy materials, and text books from FBISD.

GML also houses the Genealogy and Local History Department on the second floor of the building; the department's resources focus on the southeastern United States and include materials relating to the history of the South, federal censuses, genealogy, and the Civil War.

George Memorial Library is the central library of the Fort Bend County Libraries system. This building opened in 1986, when the main library moved from its original location in Rosenberg, Texas, by Polly Ryon hospital. The new, 77,000-square-foot building, located on six acres, was funded by The George Foundation. The impressive building, which has become renowned throughout the county and beyond, both for its architecture and as the very-visible, primary symbol for the library system, was designed by Ronald Wedemeyer Associates, Ronald Wedemeyer, Design Architect.

Then County Judge Jodie E. Stavinoha, who worked closely with The George Foundation, was very instrumental in bringing the new building to fruition. Because the county had, at that time, no cultural arts center, the planners wanted the library building to include a gallery on the bottom level for exhibitions and an amphitheater for performing arts events, to provide the community with free, cultural arts programming opportunities. The plaza adjacent to the amphitheater has a fountain as a focal piece; in 1991, a water sculpture designed and created by local kinetic artist Jaroslav Belik was donated by former library director Lillian Stavinoha Humpola in memory of her late husband, Cyril Humpola. The amphitheater was named the Jodie E. Stavinoha Amphitheater for the judge in 1997, and the gallery was named the Bohachevsky Gallery, in honor of long-time county librarian Roman Bohachevsky, when he retired in 2000.

George Memorial Library opened in 1986 with unfinished areas for future expansion. In the 1989 bond election, funds were included for that expansion, as well as for installation of an automation system. The automation conversion was accomplished in 1991, and in 1995, the partial expansion of George Memorial's second floor allowed for the relocation of the Audiovisual Department from the first floor to the second, the addition of the Distance Learning and Telecommunications Center, and inclusion of a conference room and several study rooms. The final expansion was completed in 2002, with the addition of two conference rooms, a new computer lab, and additional study and bookstack space. In the 2006 bond election, funds were included for renovations at GML; the renovations were completed in 2013. Collections were rearranged for better access and to accommodate new areas, such as a new Middle Grades department on the second floor. The library system's administrative offices were relocated from GML to a new administration building being built behind the library. The area vacated by administration became additional study rooms, a staff-training lab, and an Internet Cafe.

The Friends of the Fort Bend County Library was the first group of library friends to be organized in the county, in 1972. Its goal was to support the entire library system with extra funds for things not provided for in the county budget. The group has an ongoing book sale in the library, as well as large, special sales twice a year. This organization has provided funding for trophies for the Summer Reading Club for many years, as well as funds for special programming for both children and adults. It is the primary sponsor of the annual Shakespeare-by-the-Book Festival, and has provided funding for library staff development and continuing education programs for many years. Among the many purchases made by the group for the library is the large Christmas tree that is decorated and put on display in the front lobby of George Memorial every year for the holiday season. For more information about the Friends of Fort Bend County Libraries, or to join the organization, click here or call 281-342-4455.